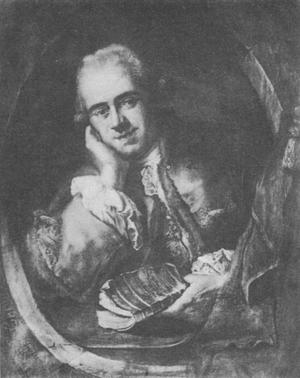 Jean-Baptiste Willermoz.
Jean-Baptiste Willermoz was born on July 10, 1730 in Lyon. He became a Mason in 1750, at the age of 20. In 1753 he founded in Lyon a regular Lodge called ‘La Parfaite Amitié’, of which he became Master. In 1760 he played an important role in the founding of the Grande Loge des Maîtres Réguliers de Lyon, of which he became Grand Master. In 1763, influenced by Dom Pernéty, Willermoz also created the Chapitre des Chevaliers de l’Aigle Noir Rose-Croix (Knights’ Chapter of the Black Eagle Rose-Croix).

In 1766 Willermoz met Martinez de Pasqually, founder of the Élus Coëns, at Versailles and became an enthusiastic and dedicated member of his Order. Progressing quickly in the grades, Willermoz became a Réau-Croix, the highest rank of the Order in 1768. In 1771 Willermoz also came into contact with Louis-Claude of Saint-Martin, who was the personal secretary of Pasqually, and with whom Willermoz became friends.

In 1772 Willermoz came into contact with the German Masonic Order "The Stricte Observance Templar Rite" (SOT) of Baron von Hund. In 1773, at the request of Willermoz, he was given the permission to create the "Ordre Ecossais des Chevaliers du Saint Temple de Jérusalem" (Scottish Order of the Knights of the Holy Temple of Jerusalem); the French governing body for the SOT.

In 1774 he founded a SOT lodge called “La Bienfaisance”. In that same year Pasqually died, and the Élus Coëns began to disintegrate.

In 1778, at the Masonic Convent des Gaules at Lyon, Willermoz succeeded in reforming ("rectifying") the Stricte Observance Templar Rite and introduced into it spiritual concepts and teachings from Pasqually.  After this the French provinces became known as Les Loges Réunies et Rectifiées de France (The Reunited and Rectified Lodges of France), practicing the Rite Écossais Rectifié (Rectified Scottish Rite). It was decided at that time that the Highest Degree of the new Rite would be known as the "Chevaliers Bienfaisants de la Cité Sainte” (Knights Beneficent of the Holy City), or C.B.C.S.

Following this victory, Willermoz attempted the same thing at the Convent de Willhelmsbad (1782) with his Germanic Stricte Observance Brethren. He was also largely successful in getting the Germans to adopt his reforms and many Lodges converted to his rectified degrees.

In 1785, Willermoz began to take an interest in the rather new phenomena of magnetism and spiritualism. In Lyon he organized the "Society of Initiés,"  which was engaged in the study of trance phenomenon during which a woman received communications from a spirit named "l'Agent Inconnu" or the "Unkown Agent." This inner group consisting of Élus Coëns Réaux+Croix, (including Louis-Claude de Saint-Martin) C.B.C.S. and other high ranking Masons persisted until 1791 when Willermoz and several other members came to the conclusion that the Medium in communication with the 'Agent Inconnu' was a fraud.

During the Revolution (1789-1799) Willermoz had to flee Lyon and ceased all Masonic activity. After the Revolution, he became active again and continued to maintain important Masonic correspondences all the way up to his death on May 28, 1824. Willermoz's influence has survived to this day in the Rectified Scottish Rite (now spread out throughout the Masonic World) and in various Martinist Orders.