Day of Raimond-Roger de Trencavel
​Patron of the Chevaliers Faydit 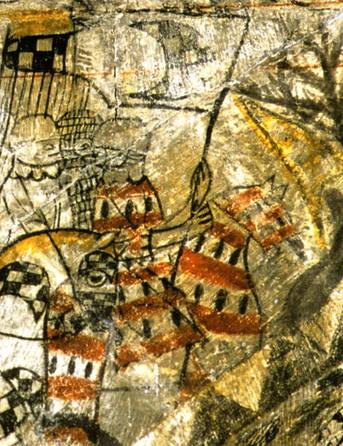 Raimond-Roger Trencavel (1185 – 10 November 1209) was Viscount of Beziers and Albi and Viscount of Carcassonne. During the Albigensian Crusade he defended both his Cathar and Jewish subjects from the Pope's and Papal Legate Abbot Arnaud Amalric’s army and from their evil and cruel crusader General Simon de Montfort with courage and humanity. The Albigensian Crusade aimed to eradicate the Gnostic "heresy" of the Cathars while conquering southern lands for Northern French Lords.

With water cut off from the Cathar defenders the crusader siege of Carcassonne was completed in August 1209 and its citizens forced to surrender. Raimond-Roger accepted a safe-conduct to negotiate terms of surrender in the Crusader camp. At the conclusion of these negotiations he was taken prisoner despite promises of amnesty, and imprisoned in his own dungeon, where he died under mysterious circumstances; there were suspicions of poisoning. The people of Carcassonne were expelled from their city with nothing more than the shirt on their backs and Simon De Montfort was appointed the new Viscount. In 1240, Trencavel's son tried to reconquer his old domain, but in vain. The city finally submitted to the rule of the Northern Kingdom of France in 1247.

Since then Raymond de Trencavel's Legend has grown and some authors have identified him with the Grail Knight: Percival. Some claim this identification was exposed, albeit esoterically, by Wolfram von Eschenbach in his Parzival in the middle of the thirteenth century. This identification has also been favoured in more recent years by Otto Rahn in his “Crusade Against the Grail,” as well as in Peter Berling’s various works including his series “The Children of the Grail,” and by Jean Blum in “Mystère et message des Cathares,” and in Joaquin Javaloys historical novel “Yo, Parsifal: el mitico caballero del Grial.”

In his glorious memory as a defender of the Gnostic tradition, let us therefore pray as One Universal Gnostic Church:

O Lord Remember Holy Raimond-Roger de Trencavel, and all your Holy Gnostic Cathar Martyrs in Thy Pleroma. Remember those faithful few who did not adore the Beast and whom the Beast slayed. Your Perfecti who lived in an age when the right to seek Thee was bought with their lives. Remember all those in their honour who have lost their lives for their chosen faith and conscience. In thy endless clemency O Lord have mercy on all the burned ones and persecuted ones of this world. Let the enemies of Gnosis be confounded and let your Light of Thy Tolerance dwell in the heart of all mankind. Amen.