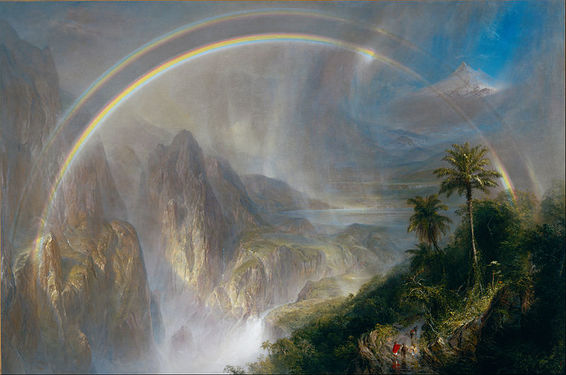 Rainy Season in the Tropics by Frederic Edwin Church, 1866.
The early Zoroastrian religion represented Ahura Mazda as Light. Throughout the Hebrew scriptures God is represented as Light. For the Egyptians, Horus, in the form Her-ur (Horus the Elder) is Light. In Hesiod’s Theogony, Æther is Light. In 1 John 1:5 we read of the message of Jesus “that God is light, and in him is no darkness at all.”

To understand God as primordial Light, consider how visible light is scattered through a prism to manifest as the seven colors of the visible spectrum. From this phenomenon, we may see God as undifferentiated unity, which radiates as seven Divine rays, represented as “the Seven Spirits before the Throne.” These are the seven light-bearers, the planets Mercury, Venus, Earth, Mars, Jupiter, Saturn, and Uranus. To represent the seven messengers of God, the Priests of the old alliance received orders from Moses to keep lighted the lamps of the seven branched candelabra with pure olive oil, the symbol of peace.

If God is Light, how do we know God and manifest that Light, which is within us? In 1 John we read:

“He that saith he is in the light and hateth his brother is in darkness even until now.” (1 John 2:9).


That God is Light, and that this Light is Love is a teaching of all the great saviors of humanity. No man can hate another and attain illumination. The person who hates others forgets that all men spring forth from the same Light and are One. Hate blinds man to this truth of his own Divine nature. Therefore, to manifest the light of the inner Christ, man must eliminate hate and selfishness from his own nature. The person who lusts after the things of the world at the expense of others remains trapped in matter and cannot attain Light.

“Ye are all the children of light, and the children of the day: we are not of the night, nor of darkness.” (1 Thessalonians 5:5) To be conducted from the depths of darkness and the Valley of the Shadow of Death to the Mansions of Light, be armed with love and virtue. “That ye may be blameless and harmless, the sons of God, without rebuke, in the midst of a crooked and perverse nation, among whom ye shine as lights in the world…” (Philippians 2:15)