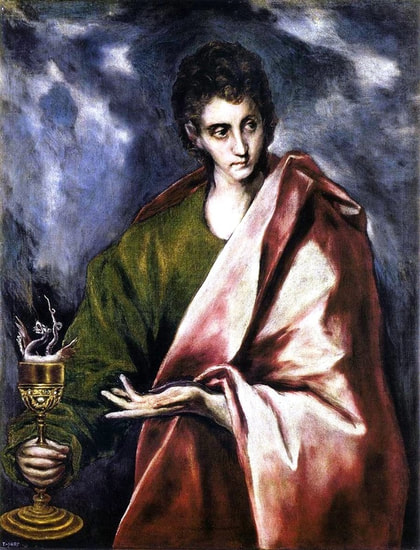 Apostle St. John the Evangelist, 1612 by El Greco.
Who was Saint John, who was called by the Greeks “St. John the Divine,” and what were his attributes?  St. John was a Galilean, and was brought up with his older brother, the Apostle James, in the fishing trade.  He was a disciple of John the Baptist, but one day when he and James were mending their nets, they saw Jesus perform a miraculous catch of fish and left everything to follow him.  Jesus called John and James the sons of thunder, to express the strength and activity of their faith in publishing the law of God without fearing the power of man. He was the youngest of all the apostles, probably about twenty-five years old.  In the Gospel, St. John the Evangelist frequently refers to himself as “The disciple whom Jesus loved,” not out of pride, but out of gratitude and love for his Master.  St. John was constantly admonishing the cultivation of brotherly love, and was known for his meekness and peaceable disposition, and for his charity towards the whole world.[1]

We find St. John associated deeply with the initiatic traditions that were attached to Freemasonry when the higher degrees were developed, namely the Rosicrucian and Templar lines.  The Templar Order was founded in 1118.  When the nine Knight Crusaders consecrated themselves in an oath under the Patriarch of Constantinople, they ascribed the foundation of their consecration, or initiation, as the lineage that derived from St. John, which was believed to carry on the secret or esoteric mysteries of his religion.[2]  So it is interesting that John in particular was said to be a true voice of thunder in proclaiming aloud the most sublime mysteries.[3]

We celebrate the Feasts of St. John the Baptist and St. John the Apostle on the summer and winter solstices, respectively.  The solstices are the times when the sun arrives at its greatest northern or southern point and seems to stand still before turning in its course.  In June the sun is at its nearest point, and in December at the farthest.  If we look at the winter solstice, which St. John the Evangelists represents, this is the moment when light begins to return and the amount of daylight begins to increase, thus representing the birth of Light symbolically throughout the ages.  In the Gospel attributed to John, written around 120 A.D., the balance between Light and Darkness is a prominent theme.

The Gospel of John emphasizes not only the theme of Light, but also the concept of the Word, opening with these lines:


The word actually used in this Greek scripture for “Word” is “Logos.” (i.e. “In the beginning was the Logos, and the Logos was with God, and the Logos was God...”)  This idea of the Logos is the key to the understanding how Eastern Hebrew and Western Greek beliefs merged to form our modern notions of God.

The Greeks, like all the ancients observing the movements of the stars, thought of the universe operating like a divine machine.  Around 500 BC, the Greek philosopher Heraclitus used the word “Logos” to describe the regularity with which the universe seemed to operate.  The Greek word “Logos” literally means, “Reason.”  The Logos is thus the Reason of God, an invisible but absolute law that sets and governs the universe.  In this Greek concept, God can be experienced in the physical universe by observing how the laws of nature govern all visible things.[4]

The dual translation of Logos as the “Reason” and the “Word” of God should not escape us.  Over time “The Word” has been thought of as God’s communication with mankind.  The Word is symbolized in Masonry by the Book of Sacred Law.  It is emblematic of the Logos, the Divine Wisdom or order in the universe that is the basis of all things.

The importance of words in the Jewish tradition cannot be overstated.  In Genesis we read that God created the world not with fire or flood, but with words.  By creating the world with words, we are taught that words carry their own power to create.  Judaism has always regarded Hebrew as a holy and mystical language in which the letters of each word are imbued with spiritual meaning as symbols of divine communication. The rabbis and Jewish mystics of old believed that through the study, contemplation, and use of letters, a person could reach an inner spiritual awareness that would bring him or her closer to understanding the mysteries of God.  Throughout history, words, the order of words, chanting, and pronunciation have all been thought of as links to unlocking spiritual powers.  Think of how words are the tools we all used to express our ideas. Words help define us and our relationships to one another. They help explain our feelings, emotions, hopes, and dreams.[6]  Words have power, not only mystically, or personally, but in the real world around us.  Consider, for example, how Grammar and powerful Rhetoric are critical in all great movements, in politics, in preaching, in teaching, and even in healing.

On the Feast of St. John, it is fitting that we reflect on the power of our own words: the words we use in our daily lives, and in our rituals and prayers. May the qualities of St. John the Evangelist be exemplified in our own ideals of brotherly love and charity.  At this time of the return of Light, let us consider that concept of the Logos, the ray of a transcendent God that touches man and has impact on his daily life.  Through our support of an idea of God that is available and real to every man, not those of a particular creed or nationality, we bring Light and Harmony into the world one community and one person at a time.

[4] James Still, The Gospel of John and the Hellenization of Jesus, http://www.infidels.org/library/modern/james_still/gospel_john.html (Dec. 27, 2012).