Music in the Microcosm and the Macrocosm
​ 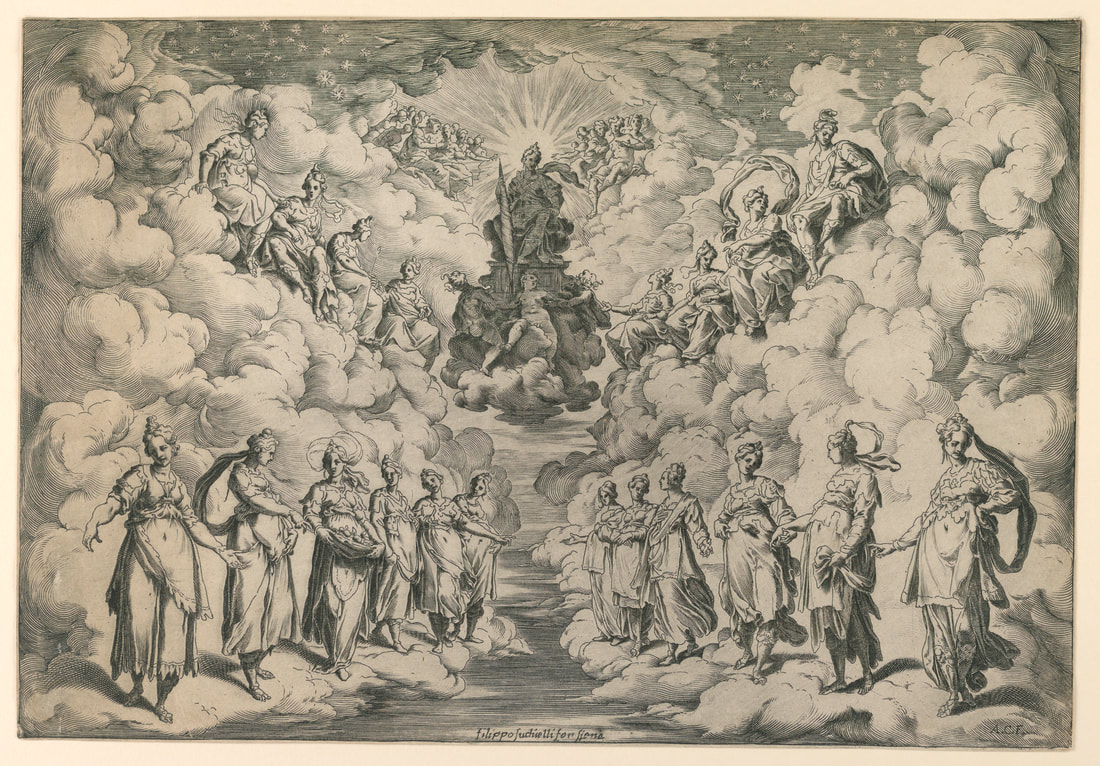 "The Harmony of the Spheres" by Agostino Carracci, 1589.
​​To understand Art in the view of the Rose + Croix, consider the idea that there is a tradition of divine knowledge as old as mankind itself, which exists in every person like an instinct, and which can be remembered. Allegorically this has been characterized as a lost language, lost chord, or forgotten word. The memory of it can be activated by certain things, such as the books you read, meetings with extraordinary persons, Rituals, Initiation, symbols, and Art.

​To give you an idea of how the artists of the French Rosicrucian tradition expressed this idea, I’d like to share an excerpt written by the French author, poet, and composer Fabre d’Olivet, whose writings influenced Peladan and also especially Dr. Gerard Encausse (known by the pseudonym Papus), the founder of the Martinist Order. In 1844 Fabre d’Olivet wrote:

​Consider the idea that Art can stimulate unconscious and ancient human instinct. Darwin theorized that music-making is a remnant of primitive communication, because he observed that the instinct to produce music exists in other animals.[2] For example, the songs of birds and humpback whales use many of the same rhythmic and musical phrasing patterns as humans.[3] To explain why music exists among species, some have proposed that music serves an evolutionary purpose. For example, we know that music triggers the hypothalamus to release endorphins, the neurotransmitters that promote a sense of well-being and play an important role in social bonding.[4] So it has been suggested that music may have replaced grooming behaviors, which also trigger the release of endorphins, as social groups grew too large for grooming to unite the groups.

Music has predictable effects on the emotions. One study suggests that the acoustic frequencies of major and minor modes are similar to those of excited (happy) and subdued (sad) speech, respectively.[5] Another found that people with no previous exposure to western music could identify happiness, sadness or fear in instrumental excerpts. Researchers concluded that western music in particular seems to mimic the emotional cues of human speech, using the same melodic and rhythmic structures.[6]

The relationship between music and the emotional cues of human speech takes us deep into the microcosm – into the womb. Before birth, the senses of sight, smell, taste, and touch are limited, but the unborn child, through the amniotic fluid, perceives the sounds of its own body, of the mother’s body, and of the outside world. The various emotional states of the mother, which are also felt by the child, are accompanied by differences in the tone, pitch, and rhythm of her voice. So our very first notion of emotional meaning is associated with sound. After birth, we forget the experience of the womb as we acquire language, but throughout our lives sound remains related to the unconscious memory of our earliest conscious experiences.[7]

​With this in mind, consider that the oldest known musical instruments were found in caves in southwestern Germany, Austria and the French Pyrenees. It has been suggested that these caves were sanctuaries of initiation rites.[8] Think about how the experiences in those caves might evoke the unconscious memory of the experience in the womb. Iegor Reznikoff, an archaeoacoustician at University of Paris, studied similar painted caves in Burgundy and observed that the resonance is so strong that a simple low hum at the right pitch is sufficient to help one proceed in the darkness. Describing this experience he writes, “The whole body co-vibrates with the gallery, it is like an identification, a deep communion with earth, stone and the mineral elements of Creation.”
​

Lascaux cave, France.
​​It is with the ancient Greeks that we arrive at music in the macrocosm. Pythagoras, who lived in the sixth century B.C.E., was the first to give a model for music that is scientific and which furthered the ancient understanding of numerical proportion in nature. Nicomachus of Gerasa the Pythagorean, who lived in the first century C.E., writes that Pythagoras walked by a smithy and “heard the hammers beating out iron on the anvil and giving off in combination sounds which were most harmonious with one another, except for one combination.” Then, by means of weights and strings, Pythagoras discovered the numerical proportions of the concordant, or harmonious, combinations: the octave is produced by a 2:1 ratio; the fifth is produced by a 3:2 ratio; and the fourth is produced by a 4:3 ratio.

These same mathematical ratios are not merely theoretical. They are actually inherent in Nature. If you take a single string stretched between two points and pluck it, it will automatically divide itself at certain points called nodes corresponding to these same numerical ratios and produce a series of what are called “overtones.” Not only does the string sound the main tone we hear, but also the octave, the fifth, and the fourth above it, and so on, in perfect harmony. Numerical proportion is present inherently in Nature, unfailingly, and by us it is perceived aesthetically as Beauty. 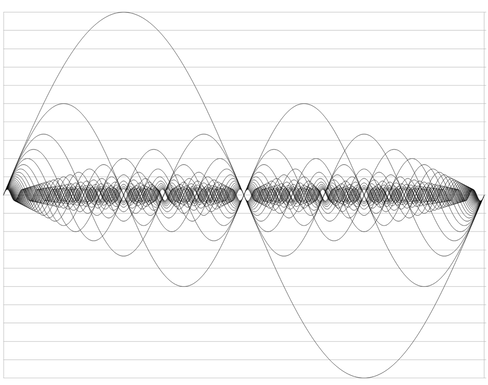 Harmonic series to 32.
​The discovery of numerical proportion in the phenomena of sound led to important speculations concerning proportion in the rest of Nature. According to Nicomachus, the prototype of our music is the music of the planets. He writes that “all swiftly whirling bodies necessarily produce sounds,”[11] and says that “we ourselves do not hear this cosmic symphony with its deep complementation of sound and its all-embracing attunement, as tradition describes.”[12]

​Nicomachus also writes, “It is probable that the names of the notes were derived from the seven stars which traverse the heavens…”
Sources: