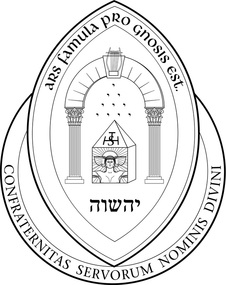 Purpose
The purpose of the SDN is:


Motto
Prefiguring the Aesthetic Rose+Croix, and in harmony with it, the Confraternity has as its motto: Ars famula pro gnosis est, which translated is “Art is the servant of the Gnosis”. The Lost Name or Lost Word, also referred to as the “Lost Chord,” from time immemorial has reverberated through all nature and perfects its expression in all the worlds through art, architecture, astro-geometry, and the music the spheres.

Membership
Membership in the SDN is offered to as many men and women as possible, worldwide, who pursue Gnosis, and who:
There are four stages in religious formation:
The SDN does not discriminate on the basis of race, ethnicity, sex, sexual orientation, nationality, political ideology, class, or social condition.

Structure
The SDN is composed of individual members worldwide, and Chapters of the Divine Name. A member may or may not participate in a Chapter when one exists in the member's locale.

Fees
Initiations and studies are entirely free of charge.

If you are interested in joining the SDN, please contact us to request a Petition for Membership.