Feast Day of the Holy Archangel Raphael
Intent: The Healing of God 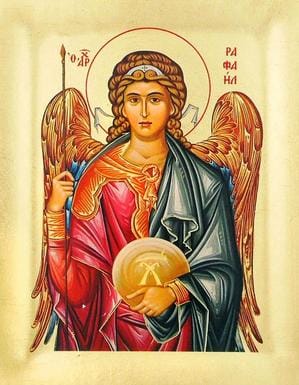 ​The name Raphael means the “Healing of El” or of God. In the Gnostic Tradition Archangels are forces emanating from the One working in all the aeons to bring all things back into the Pleroma. As the Divine Healer, Raphael is therefore one of the countless rays which form part of the Great Light of God’s Holy Love.

This Healing Being was revealed to us in The Book of Tobit where he first appears disguised in human form as the travelling companion of Tobit's son. During the course of the journey the Archangel's protective influence is shown in many ways, including the binding of a demon in the desert of Egypt and healing the blind Tobit. He then reveals himself as: "the angel Raphael, one of the seven, who stand before the Lord” and offers the following advice:

“Bless God, praise him and magnify him and praise him for the things which he hath done unto you in the sight of all that live. It is good to praise God and exalt his name and honourably to show forth the works of God: therefore be not slack to praise him. Do that which is good and no evil shall touch you.”

Due to his actions in the Book of Tobit, Raphael has long been considered the patron of travelers, the blind, physicians, psychiatrists, psychologists, nurses, and all those working in various medical professions. As a particular enemy of demons, he was also revered as a protector of sailors. For example, on a corner of Venice's famous Doge's Palace, there is a relief depicting Raphael holding a scroll on which is written: "Efficia fretum quietum” (keep the gulf quiet) and a little statue of Raphael even accompanied Vasco Da Gama on his many explorations at sea.

In the Christian Esoteric Tradition Raphael is one of the Four Great Archangels and Guardians of the Quarters. He is the ruler of Air and of the East, wears robes of yellow and violet, and carries a dagger or caduceus wand. He is also the Archangel associated with the eighth Sephira Hod in the Christian Kabbalah or God’s Splendour, to Divine Knowledge, to Right Thinking and to the planet Mercury and the Cherubim of Man.

The feast day of Raphael was included for the first time in the General Roman Calendar in 1921, for celebration on October 24 but then was moved to September 29 for celebration together with then Archangels Saints Michael and Gabriel. The Gnostic Church has settled for December 22 after the example set by the Ecclesia Gnostica.

Let us therefore, as One Gnostic Community and One Universal Gnostic Church, sincerely thank the Archangel Raphael for his countless miracles of Divine Healing, may those that surround us who are sick in body, mind or soul be healed through his intercession and may we also be transformed into instruments of God’s Healing Power and so radiate that power outward to others that we may become co-repairers of this world. Amen.