Gnosis is a Greek word referring to knowledge and cognition. It is both scientific knowledge and knowledge of the divine things, closely bound with the experiences of revelation and epiphany. The name “Gnostic” describes numerous sects in the first centuries of Christianity who sought and revered gnosis, and who affirmed personal spiritual experience and freedom of religious expression to be more important than dogmas of belief.

The name “Gnostic” is a collective heading used anciently to describe numerous sects within and around Christianity during its critical first centuries, who sought and revered gnosis. These Christians distinguished themselves by affirming personal spiritual experience and freedom of religious expression to be more important than dogmas of belief.

Until the mid-second century, the Christian community openly included Gnostics. However, from the late-second century onward, an increasingly dogmatic and powerful orthodoxy waged a campaign to suppress Gnosticism in all of its forms and to anathematize Gnosticism as heresy. As part of that attack, many Gnostic Christians were killed, and Gnostic texts and scriptures were destroyed. Overtly, orthodoxy succeeded in its campaign against Gnosticism. However, the tradition persisted in many covert forms (as among the Cathars, Templars, and Rosicrucians), occasionally reasserting itself through the course of Western history. From late antiquity onward, however, Gnosticism has been anathematized by the dominant orthodox traditions of Christians as heresy.
​

Restoration of the Gnosis 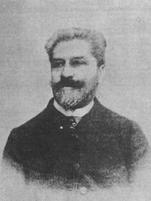 Jules Doinel (Tau Valentin II)
By the late 18th through early 19th centuries, a serious movement was underway from within the Roman Catholic Church of France to return the Gnostic Throne of John to the Western World. This involved numerous ecclesiastics, who were leading Masonic and Templar figures. In 1890 Jules Doinel founded the Universal Gnostic Church in Paris and consecrated three bishops who were prestigious leaders of Arcane Orders active in France. The founders and leaders of the Gnostic Church in its 19th Century revival were well informed and devoted to a longstanding and hidden tradition of classical Gnosticism. Our Ecclesia has for long been known as regarded as L'Eglise des Inities (“The Church of the Initiates”), having served since its establishment as a sanctuary of refuge for initiates of the Western Mystery Tradition desiring to receive the sacraments denied them by the Latin and other Churches.​

Though perhaps accurately described at the beginning of the twentieth century as “a faith forgotten,” the last several decades of the century have witnessed a quite remarkable Gnostic renaissance. Large collections of primary Gnostic texts, works once thought destroyed (including the Dead Sea Scrolls and the immensely important Nag Hammadi Library) have been rediscovered. Students of Christianity are being forced to reconsider the nature of Gnosticism and its import in formation of the Christian tradition – an inquiry which has simultaneously enlivened interest in traditions allied with classical Gnosticism, traditions such as Hermeticism, Manichaeism and the Cathar movement of medieval France.

A renewed interest in Gnosticism has also brought interesting new insights to the study of literature, art, and psychology. The vital influence of Gnostic experience and vision is now being noted within broader realms of Western culture, ranging from the hermetic thrust of the Renaissance, to the art and poetry of William Blake, the novels of Thomas Pynchon and the literary criticism of Harold Bloom. Even more importantly, modern depth psychology – particularly the psychology of Carl Gustav Jung – has identified in Gnosticism the precursors of its own quite modern insights into the human psyche.

At the heart of Gnosticism there abides an affirmation of symbol and sacrament as effective means of invoking and expressing the most authentic levels of ourselves. Symbols can express the human psyche’s deepest truths. Christian symbolism has developed slowly over two millennia as an embodiment of our civilization’s deepest spiritual aspirations. In total, it forms a previous gift from the past; within it there reside treasures yet awaiting our modern consciousness.

As a symbolic form, liturgical ritual remains an effective vehicle for the transformation of consciousness. Properly encountered, religious ceremony can establish new levels of receptivity to the inner world of the spirit. The central Mystery of our sacramental practice is the Holy Eucharist. The structure and content of our Eucharistic liturgy (i.e. the Mass) is similar in structure to the Latin rite, with elements inspired by the Gnostics of the First through Fourth Centuries A.D.
​

Services are free and open to the public.

​We invite you to join with us in experiencing this living tradition.