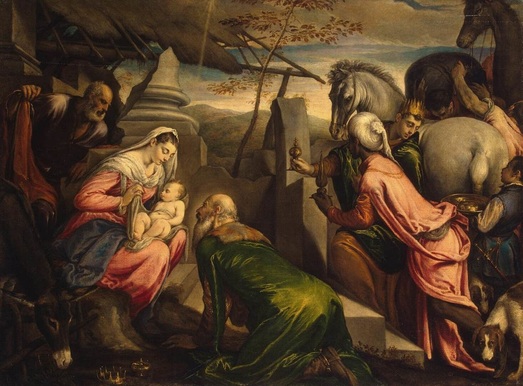 The Adoration of the Magi by Jacopo Bassano (1510-1592).
First in a series on Gnostic Astro (astral) Theology

To My Dearest Brethren In Gnosis,

I impart to you my happy greetings this Epiphany and a reminder about the true cosmic significance of the day. Many historic days of our EGA have been on December 25th, at least since the ascent of Dr. Pedro Freire (Mar Petrus Johannis XIII) of Puerto Alegre, Brazil, to the Patriarchal Chair in 1970 and upon assuming his Holy Office he instituted a new Church Seal bearing the motto from the canon gospel of St. John 1:5:

"And the light shineth in darkness; and the darkness comprehended it not"

In this verse the gnostic initiates have always recognized the doctrine of the fall or 'involution' of the sperma (Greek = 'seed,' another known gnostic acronym for logos) or sparks into the envelope of matter or darkness. the abyss or kenoma. In other words, this cosmic terrestrial event is a portent of the gnostic salvation drama, which culminates at Easter. For the gnostic these solar events and calendar mirror for us 'the Ecclesia,' the cycle inwardly and outwardly of what we regard as the "Mystic and Cosmic Christ," referenced throughout the celebration of the Gnostic Mass.

The legend that Christmas was adopted as the official marker of the birth of the cosmic Christ from the Mithraic celebrations of "Sol Invictus" may be a bit blurred. Nevertheless, both pagan and Christian writers and scholars acknowledge a popular cross identification of the two holy festivals. Here reproduced is an excerpt from Wikipedia regarding the controversy that persisted for a few centuries before the Latin Church authorities finally accepted the date as that of Christ's nativity:

﻿"The Philocalian calendar of AD 354 gives a festival of "Natalis Invicti" on 25 December. There is limited evidence that this festival was celebrated before the mid-4th century.

"The idea that Christians chose to celebrate the birth of Jesus on 25 December because this was the date of an already existing festival of the was expressed in an annotation Sol Invictus to a manuscript of a work by 12th-century Syrian Bishop Jacob Bar-Salibi. The scribe who added it wrote: "It was a custom of the Pagans to celebrate on the same 25 December the birthday of the Sun, at which they kindled lights in token of festivity. In these solemnities and revelries the Christians also took part. Accordingly when the doctors of the Church perceived that the Christians had a leaning to this festival, they took counsel and resolved that the true Nativity should be solemnized on that day.”


- Cited in Christianity and Paganism in the Fourth to Eighth Centuries, Ramsay MacMullen. Yale: 1997,


Enter the Legend of the Star of Bethlehem~
Other compelling records of the December provenance for the divine birth are found in the semi scientific annals of the convergence of planets producing the cosmic effect in the skies over Israel, estimated to be near the solstice time in 6 B.C., which is when many scholars tend to place the “visitation of the Magi” event. The following excerpt from Michael Molnar's "The Star of Bethlehem: The Legacy of the Magi" cites the following supposed evidence:

"Jupiter was the regal 'star' that conferred kingships - a power that was amplified when Jupiter was in close conjunctions with the Moon. The second occultation on April 17 coincided precisely when Jupiter was 'in the east,' a condition mentioned twice in the biblical account about the Star of Bethlehem. In August of that year Jupiter became stationary and then 'went before' through Aries where it became stationary again on December 19, 6 BC. This is when the regal planet 'stood over.'"


Enter the Magi
Whether this is accurate or not is not our purpose. Our interest here is that the gospel legends attempt to be consistent in the December provenance for the divine birth. Beyond this is another underlying subject of interest: the Magi's doctrine of The Precession of Equinoxes or Axial precession of the Earth. That hermetic and astrological doctrine holds that every 2000 years the cosmic zodiac moves a sign often equated in certain gnostic schools with an ‘eon,’ ‘aeon,’ or ‘age’ that causes a new divine rule or regime or ‘aeon’ to become predominant in philosophy, religion and other subtle and physical occurrence effecting planetary development and evolution.

Jesus ushered in the ‘Piscean Age,’ which succeeded that of Aries (whose custodian was Moses), the celestial Ram which signified ‘will’ or ‘law;’ and while the Piscean Age of the fish portrays an age of faith and belief, which would be superseded in the present era by our Aquarian age of knowledge and scientific advancement (i.e. the information age). Note that the cosmic zodiac rotates counterclockwise in this system (beginning with Capricorn and ending with Aquarius), which is reverse of our terrestrial calendar. It is here worthy to note that this schema so to speak, of the Magi is the prototype for our current 12 month calendar, seven day week and clock of 12 hours. Here again are some Wikipedia excerpts on the subject.

"In astronomy, axial procession is a gravity-induced, slow, and continuous change in the orientation of an astronomical body's rotational axis. In particular, it refers to the gradual shift in the orientation of Earth's axis of rotation, which, similar to a wobbling top, traces out a pair of cones joined at their apices in a cycle of approximately 26,000 years.[1] The term "precession" typically refers only to this largest part of the motion; other changes in the alignment of Earth's axis – mutational polar motion – are much smaller in magnitude.


"Historically,[2] Hipparchus has been credited with discovering the procession of the equinoxes, although evidence from cuneiform tablets suggest that his statements and mathematics relied heavily on Babylonian astronomical materials that had existed for many centuries prior. The exact dates of his life are not known, but astronomical observations attributed to him by Ptolemy date from 147 BC to 127 BC."


The influence of the Magi is so pervasive throughout the gnostic literary stream that I can only summarize here part of it's impact on our studies. The astronomical and astrological import of their teachings reach deeply into the sacred literature, especially as found in St. John’s Revelation, where Magian astrological symbolism and numismatics (inclusive of sacred gematria) are quite prevalent and obvious to the adequately informed. Most notably in St. John’s Apocalypse is the presence of the four beasts before the throne, which are cryptically and indisputably the four fixed signs of Taurus, Leo, Scorpio and Aquarius, the sign also known in both old and new testaments as “the sign of the Son of Man.” These divine beasts are also featured in the Book of Daniel as well, thus a sure sign that an astrological doctrine within Judaism existed before the Messianic Era.

The Mystic and Cosmic Christ
Let us return to the mystic Christ as I conclude my remarks on the present topic. We proclaim in our gnostic Eucharist, our flaming desire to the realization of the indwelling mystic and cosmic Christ, who is “the Essential” i.e. the archetype referenced in almost all of the EGA ecclesiastic documents (especially our ordination letters and charters). In the French gnostic Mass, at the actual point of "fraction du pain"( immediately following the minor elevation and preceding the Lords Prayer) the priest commemorates the ‘fall’ of the sparks into matter by crossing the triangular shaped particle of bread over the cup and dropping it into the wine thus according to our tradition, inflaming the chalice. As a reminder to us this image of the blazing chalice appears in the center of the EGA seal.

At the kiss of peace, which follows the pater noster or Lord’s Prayer, we recognize each other as individual manifestations of Christ as He is in us and therefore celebrate the Body of Christ on Earth ‘as it is in the Pleroma.’ This invokes the real mystic Christ revealing his spirit to his disciples even as the event recorded in St. Luke’s Gospel:

“Then the two men began to tell what had happened on the road and how they had recognized him when he broke the bread in pieces.”
- St. Luke 24:35 Int’l Standard Bible


Here I have endeavored to offer gnostic insights of the symbolisms of the Christmas-Epiphany season and its cosmic and astral background, which have played a role in traditions of the Churches as well as subtle symbolism shown in our Church Seal. It is my hope that beyond the intellectual matter presented here, our clergy and adherents will see the threads of continuity between the Cosmic and Mystic or esoteric Christ, which are central to the gnostic illumination and salvation, in keeping with the revered hermetic dictum “As Above so Below,” or as Jesus in the Gospel of Thomas relates it, “make the two one and make the inside like the outside and the outside like the inside and the above like the below.” Please also visit the article THE GREAT SEAL OF THE GNOSTIC CHURCH by Our Late Primat of Enlightened Memory Tau Charles, my own consecrator, initiator, and spiritual father.

Now we wish you strength and God's speed upon your Gnostic Journeys,
From the Sanctuary of Gnosis, West Chicago, IL