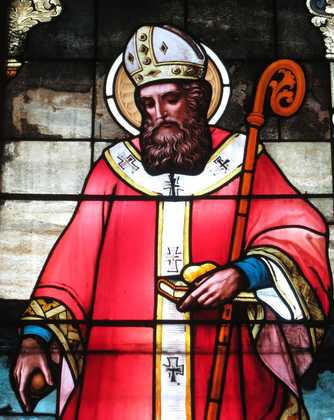 ​Saint Nicholas (270–343) was a 4th century Christian saint and the Greek Bishop of Myra. Because of the many miracles attributed to him, he is also known as Nikolaos the Wonderworker.

A legend of Saint Nicholas involves a poor man who could not afford a dowry for his three daughters, which meant that they would remain unmarried and probably become prostitutes. Nicholas decided to help the girls, but instead of doing so publicly, he went to their house at night and threw three purses filled with gold coins through their window. Different versions of the legend have Saint Nicholas delivering the purses on three consecutive nights or three consecutive years. On the third occasion, the girls’ father waits discover the identity of their helper, so Saint Nicholas drops the third bag down the chimney instead. In one version of the story, the purse of gold coins falls into a stocking hung to dry by the embers of the fire.

This story of the Holy Saint Nicholas reminds us of the virtue of concealing the identity in acts of charity, and of the words of the Venerated Master Louis-Claude de Saint-Martin: “I have desired to do good, but I have not desired to make noise, because I have felt that noise did no good, and that good made no noise.” What is to be gained by concealing the identity in an anonymous act of giving? It teaches one to focus on the good of the act itself, instead of what is to be gained for the ego by being recognized. It can help a person to prune away undesirable aspects of the personality, such as pride, conceit, vanity, and arrogance. Also, turning inward, instead of turning to others seeking approval, may help a person to listen better to his or her own inner guidance.

While representing the admirable trait of modesty, concealing the identity symbolically represents that God cannot be anthropomorphized. God is impersonal, and cannot be seen or known. He is known only through His manifestations.

So as we consider Saint Nicholas, whether we keep our acts of charity and service strictly secret, or simply make our best efforts to be mindful of the ego, during the Christmas season of giving, let us act and give of ourselves not for the gratification of ego, but for the joy of others, for the development of the higher and nobler personality, and in imitation of the generosity of a beneficent God, our Heavenly Father.