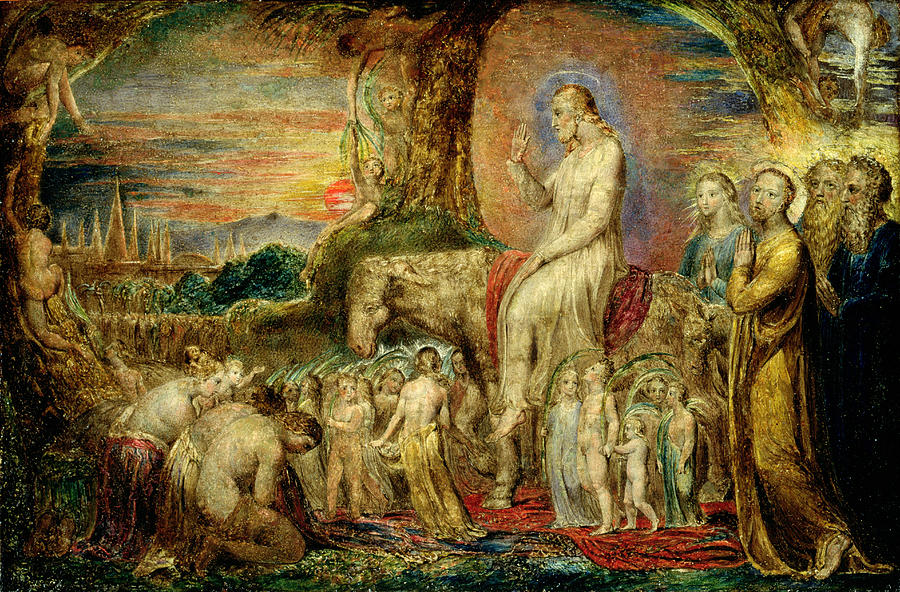 Christ's Entry Into Jerusalem is a painting by William Blake, 1800.

In the biblical story Jesus rides into Jerusalem in a provocative act, openly assuming the role of the Messiah. He is declaring himself claimant to the throne of Israel by pantomiming the prophesy of Zechariah (9:9): "Rejoice greatly, O daughter of Zion; shout, O daughter of Jerusalem: behold, thy King cometh unto thee: he is just, and having salvation; lowly, and riding upon an ass, and upon a colt the foal of an ass." The traditional narrative of the canonical gospels tells us (Matthew 21:1-11):

"And when they drew nigh unto Jerusalem, and were come to Bethphage, unto the mount of Olives, then sent Jesus two disciples,
Saying unto them, Go into the village over against you, and straightway ye shall find an ass tied, and a colt with her: loose them, and bring them unto me.
And if any man say ought unto you, ye shall say, The Lord hath need of them; and straightway he will send them.
All this was done, that it might be fulfilled which was spoken by the prophet, saying,
Tell ye the daughter of Sion, Behold, thy King cometh unto thee, meek, and sitting upon an ass, and a colt the foal of an ass.
And the disciples went, and did as Jesus commanded them,
And brought the ass, and the colt, and put on them their clothes, and they set him thereon.
And a very great multitude spread their garments in the way; others cut down branches from the trees, and strewed them in the way.
And the multitudes that went before, and that followed, cried, saying, Hosanna to the son of David: Blessed is he that cometh in the name of the Lord; Hosanna in the highest.
And when he was come into Jerusalem, all the city was moved, saying, Who is this?
And the multitude said, This is Jesus the prophet of Nazareth of Galilee."


The absurd image of a man riding two animals should lead us to consider this story for its esoteric meaning. Jerusalem, or Hierosolyma, means sacred wholeness. Hiero means sacred, and Shalem means peace or wholeness. The triumphant entry into sacred wholeness suggests the soul’s return to its homeland, the Celestial City. In several forms of initiation, both ancient and modern, this is represented by the candidate entering the eastern gate.

The soul is carried into the gates of the Holy City by the animal portion of its nature. There are two generations of the animal (a colt and an ass). It is the phases of corporeal life (youth and adulthood), and also the succession of lifetimes, that take up the labor of carrying the soul into the celestial gates.