The Great Seal of the Gnostic Church

When Tau JEAN III (Robert Ambelain) restored the Gnostic Apostolic Church in Paris, assisted by members of the High Gnostic Synod, he adopted the Icon of the Black Madonna of Cestokowa to serve as the coat of arms for the New Church, this Madonna seated on the chair, holding the infant Jesus on her knees as it was represented in one of the stained glass windows in one of the basilicas in France [1]

The Icon reproduces this plain sentence full of grace: "Ego Mater pulchras dilectionis, a Negotio perambulante in Tenebris. I am the Mother of all grace, who watches the pilgrims in the night." But on December 27, 1970 when Mgr. Pedro Freire Mar PETRUS JOHANNES XIII ascended the Patriarchical throne, he thought to endow the Gnostic Church with a coat of arms which would be more in accord with the gnostic conception of the universe, and that is how this seal, this "stamp" which in some way constitutes a pantacle evoking an astral stereotype summing up the cosmic laws revealed by the millenary gnosis. The Great Seal of the Gnostic Apostolic Church was conceived by Mar PETRUS JOHANNES XIII and realized in Venezuela, in Caracas to replace the coat of arms of the Black Madonna and the Child, the Solar Goddess, coat of arms conceived by Tau JEAN III, Robert Ambelain.

We have not well understood the commentaries in the Gnostic world of the Haitian diaspora of New York on the subject of this Black Madonna: There are so many of them in the world, the Black Madonna of Chartres, of St. Jacques de Compostelle, of Czestokowa, etc. The Patriarch PEDRO FREIRE, having had the Great Seal of the Gnostic Church designated, here is the explanation that he gave about it: "Fields not altered in "Vesica Piscis" that is to say the surface geometrically projected by the meeting of the eclipse and of the heavenly equator to the equinox points or all the history cosmically well told in a mythic fashion of the soteriological tradition from ancient temples: Birth, Death, Resurrection, cyclic renewal of which the evangelical legend is understood, moreover poorly understood to tell it anthrompomorphically anthropomorphisized, in a dreadful, dark and miraculous way."

There are no colors, because it is a question of a "SEAL" otherwise stated as a stamp of which the figures alone are valid. On the border, the legend: "Et Lux in Tenebris lucet, et Tenebrae eam no perciperunt" taken from the Gospel of St. John I, 4-5, Latin version from the Greek text:"Kai To phous hen tes skotia phainel. Kai hec skotia auto on katelaben." Then I explain: this word "KATLABEN" was changed to "Comprehenderunt" in the Latin Vulgate, that which was neither good, nor bad, but confused; because it is a plural form declined in Latin "Comprehendo, Comprehensio", of which the natural sense is from "Taking, embracing, feeling" containing, behaving, uniting, implying, enveloping and by extension of "Conceiving, understanding, perceiving." But in Greek, the word "Katelaben" comes from "Katalaman". prefix Kata, having the sense of conceiving, distinguishing, perceiving, remarking, it is the word "Perlambano," prefix "peri" which has the proper sense of "containing, embracing, enveloping." There is no confusion and that is why we have preferred the word "Perciperunt" to the word "Comprehenderunt" for the legend which encircles our Great Seal.

It is a patriarchical church, and we see the triple Tau of the High Priests, it is an initiatic and Apostolic Church and we see there the keys of the mysteries and the power to open and close, posed to St. Andrew's Cross, the ancient X-Tau: the astronomical cross, the Sign of the Lamb. 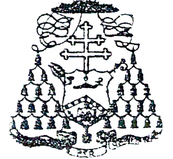 1. Editor's note: The actual Madonna used on the seal appears to be the Blue Madonna of Chartres.