Day of the Martyrdom of Jacques de Molay,
​Grand Master of the Poor Fellow Soldiers of the Temple of Solomon (1314) 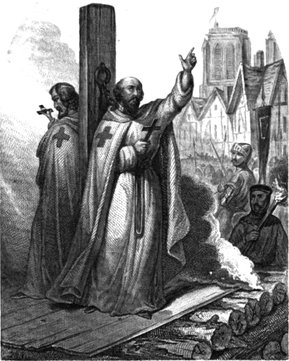 Lots of ink has been spilled over the years as to whether or not the Templars were in fact heretics and what the nature of that heresy was. However, what is unmistakable is that Jacques Burgundus DeMolay has become an enduring symbol of the right to freedom of religion and worship. He has been used as a symbol for this sacred right in Masonic Degrees such as those of the York Rite Knights Templar and some Scottish Rite Based Degrees. Whether there was any actual historical link between the historical Templars, Gnosticism and the Masons we may never truly know, but perhaps what is more important is how Jacques DeMolay’s is an example of composure, courage and strength under terrible persecution by clerical and secular forces hell bent on destroying free thought.

Jacques Burgundus DeMolay was born in Molay, in the Haute-Saône, in the County of Burgundy, and in modern times in the area of Franche-Comté, northeastern France. He was born, as most Templar knights were, into a family of minor or middle-ranking nobility. It is suggested that he was dubbed a knight at age 21 in 1265 and is known that he was executed in 1314, aged about 70. If correct, these dates lead to the belief that he was born around 1244.

After a long-time as Grand Master, DeMolay travelled to Paris on 12 October 1314, where he was a pallbearer at the funeral of Catherine of Courtenay, wife of Count Charles of Valois, and sister-in-law of King Philip. Therefore, Philip probably waited for this event before the final crackdown on the Templars to ensure that he could capture DeMolay. In a dawn raid on Friday, 13 October 1307, Molay and sixty of his Templar brother knights were then arrested.

DeMolay amongst other high ranking members of the Order was kept in prison for 7 long miserable years in the worst conditions and tortured severely. These 7 years made him into a ghost of his former self. Despite this at the end of his starving existence he recanted all the false confessions he made under torture by the inquisitors and went to the scaffold with a clean conscience. If he had been a heretic and a Gnostic then he died as one with incredible bravery.

On the 18 March 1314, on a scaffold in front of Notre Dame, Jacques de Molay, Geoffroi de Charney, Master of Normandy, Hugues de Peraud, Visitor of France, and Godefroi de Gonneville, Master of Aquitaine, received the sentence agreed upon by the cardinals. Considering the offences which the culprits had confessed and confirmed, the penance imposed was in accordance with rule — that of perpetual imprisonment. The affair was supposed to be concluded when, to the dismay of the prelates and wonderment of the assembled crowd, Jacques de Molay and Geoffroi de Charney arose to say that they had been guilty, not of the crimes imputed to them, but of basely betraying their Order to save their own lives. They said that the Order was pure and holy.

In response the canons immediately pronounced them as relapsed heretics to be burned at the stake without a hearing. That same day, at sunset, a pile was erected on a small island in the Seine, on the Ile des Juifs (Island of the Jews), near the palace garden. There de Molay, de Charney, de Gonneville, and de Peraud were slowly burned to death, refusing all offers of pardon for retraction, and bearing their torment with a composure which won for them the reputation of martyrs among the people, who, legend relates, reverently collected their ashes as relics.

​Let us therefore pray, as One Gnostic Community and One Gnostic Church that we will never see the tyranny that Jacques DeMolay suffered ever reign again on the hearts, souls and bodies of humanity. May the Divine Aeon Christ, the Lord of Liberty and the Holy Mother, to which DeMolay was so devoted, and St. John their Patron, cherish them forever in the Myriad Halls of the Holy Pleroma; and may we Gnostics emulate their Courage and Spiritual Chivalry and ever put Truth before pride, Liberty before power and Freedom of Thought before orthodoxy. By the sign of Gnostic Liberty the spirit of Jacques DeMolay will conquer! Amen.