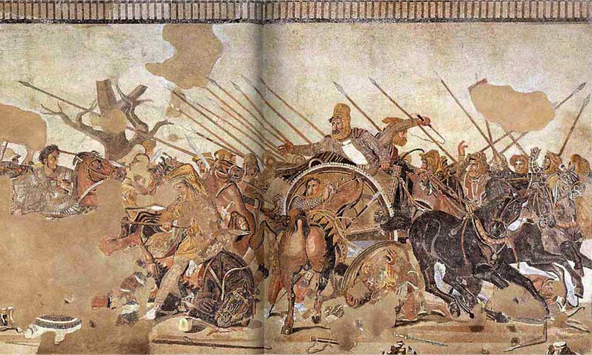 Any study of primitive Christianity in the earliest centuries A.D. can be illuminated by considering the spread of classical Hellenistic culture before and after the conquests of Alexander the Great (336–323 B.C.). By investigating the religious syncretism (i.e., mixing of religions) that took place at that time, we can better understand the philosophical environment in which Christianity was born.

Before Alexander, universalistic thought in the classical phase of a national culture (359–336 B.C.)
Several philosophic movements prepared the way for a universalistic stage of Greek thought. Socratic-Platonic rationalism carried the germ of universalism. The Sophists (5th century B.C.) set the individual over and against the state and its norms. The Cynics reevaluated existing norms of conduct and promoted self-sufficiency, the private individual, indifference to traditional values of society, and freedom from prejudice.

The period before Alexander saw a decline of old city states as the Greek world was unified under the Macedonians. Cultures mixed more easily than before, so thoughts became identified less with particular locales. In order to become more transmissible and exchangeable, thoughts were put into more abstract forms that could be learned, supported by argument, and subject to rational discussion. The result was a reduction in the particularistic aspects of local cultures, and a strengthening of those ideas which were of more general spiritual validity and more universally applicable to mankind.

At this time the West was considered to be the area around the Aegean. The East encompassed the old oriental civilizations from Egypt to India. Conditions in the East were quite different from the west. The East was unified under Persian rule, but was far from being a cultural unity like the Greek world. The East was characterized by political apathy and cultural stagnation (there is a scarcity of oriental sources from this period, except for Jewish literature).

When the Macedonians conquered the Persians, it involved the whole “West” and whole “East.” This brought forth the rise of a supra-national, Hellenistic culture. Only the Greek voice was heard. Anyone who wished to participate in the intellectual life of the age adopted Greek culture. As the Greek view that Reason is the highest part in man spread, it led to the broader idea of “man” in general, because Reason became the principle that distinguished man. The moral end of man was to be a good citizen of the cosmos, or a cosmopolites. His title to this citizenship was his possession of logos, or Reason. Thus the Hellenic way became a general humanistic culture. One could become a Hellene by education, not only by birth.

After Alexander, religious syncretism in a Hellenistic cosmopolitan secular culture (~300 B.C.–1st century B.C.)
After Alexander, from around 300 B.C. into the first century B.C., Hellenism was in a state of cosmopolitan maturity. A continual influx of oriental populations brought the growth of Alexandria. The central phenomenon of the period was the mixing of religions. This was the beginning of theological abstraction. As religions separated from their city centers and institutions of governmental power, the substance of local beliefs had to be transformed into more abstract ideologies. Beliefs were now forced to stand on their spiritual content alone, thus liberating the spiritual substance of religion from politics.

In this period before the advent of the Christian era, Eastern thought began to influence the West. Eastern thought was non-conceptual and conveyed in images, symbols and myths, instead of being expounded logically. Several Eastern notions influenced the West, particularly:

- Dualism (that there is a total separation between the mundane world and the divine);

- Transcendent monotheism (the idea of a unifying principle that is beyond reach or comprehension).


​Greek influence made the East form its ideas into theories and rational concepts. Astrology and magic were put into the context of Stoic cosmology with its doctrines of sympathy and cosmic law, and into the religious dualism of Platonism. Whatever could not assimilate or be represented adequately went underground. As this underground movement matured, the West was ready for religious renewal, and the novelty of revived Eastern thought gave Eastern gods and cults a certain prestige. The orientalization of the West was a spiritual countermovement that reshaped the worldwide universal culture. This came to an end about 300 A.D., leaving the world with a new mixture of old oriental thought’s whole mythological heritage (particularly Jewish ideas and figures from biblical lore) with doctrines of Greek philosophy, particularly Platonism. The oriental wave manifested in the Hellenistic world from the beginning of the Christian era as the spread of:

(2) Babylonian astrology and magic, coinciding with growth of fatalism in West;

(3) Diverse Eastern mystery-cults throughout the Hellenistic-Roman world, and their evolution into spiritual mystery-religions;

(4) Transcendental philosophies of late antiquity, beginning with Neo-pythagoreanism and culminating in the Neoplatonic school.


In this atmosphere there was a growth of gnostic movements both inside and outside of the Christian framework. The gnostic systems compounded everything: oriental mythologies; astrological doctrines; Iranian theology; elements of Jewish tradition (whether Biblical, rabbinical, or occult); Christian salvation-eschatology; and Platonic terms and concepts. This was the greatest syncretism, and it pervaded the thought and literature of the age. It was not a directionless eclecticism. To the contrary, there was an underlying unity to gnostic thought with certain features being commonly represented.

Later, Hellenism is marginalized as a pagan religious culture
In the beginning of the Christian era and for two centuries later, the eastern Mediterranean was in profound spiritual ferment. Palestine was seething with exchatological (salvational) movements, one of which was Christianity. The general religion of the period is a 1) dualistic 2) transcendent religion of 3) salvation. With the rise of Christianity, Hellenistic culture (not only religious, but secular) became regarded as a pagan culture and narrowed into a minority party cause. Religious and philosophical ideas were for the last time systematized and crystallized into a tradition of pagan antiquity, and broadened to include oriental creations like the religions of Mithras and Attis. Interestingly, the whole struggle was within a Greek framework, so much so that the victor, the Christian Church of the East, was to be predominantly a Greek church. After the Roman Empire was established, “West” meant the Roman half and the Latin Church, and “East” meant what had formerly been the Hellenistic West/Asiatic East and the Greek Church. In the wake of the Christian expansion, Gnostic sects soon began to spring up everywhere as the representation of the spiritual crisis of the age. A common feature of numerous sects at this time was the emphasis on knowledge as the means of salvation. The word gnosis is derived from the Greek word for “knowledge.”


​Adapted from: Jonas, H. (1963). The gnostic religion: The message of the alien God and the beginnings of Christianity. Boston: Beacon Press.